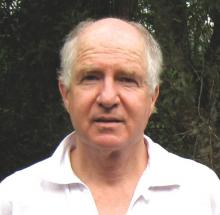 Charles Genoud is a meditation master in both the Dzogchen and Vipassana traditions and is perhaps best know for his "Gesture of Awareness" practice.

a major mind of Buddhism today comes this unique philosophical work, which hearkens back to the classical verse-form, but in a modern voice that speaks directly to the 21st-century reader and practitioner. Gesture of Awareness involves a fascinating

philosophical exploration of time, space, and movement but at the same time is a manual for an embodied 'practice of exploration.' Genoud is very well known to the leading lights of Buddhism today. He and his work are continuingly praised for their invention and importance. Well-versed in French and continental philosophies, as well as Eastern thought, he has produced a work that will be welcomed as a Buddhist book and a noteworthy contribution to the larger philosophical community.